Should I leave multiple comments to say thank you to professors who commented on my question?

Or is this considered "noise" on the SE network and should be avoided?

For example, my last question on Academia.SE, I got very candid and useful comments and suggestions from at least four professors. I want to say "thanks, professor X" to each one of them in the comments section. Should I refrain from this and instead just upvote the comments?

Short thank-you comments are generally frowned upon by the Stack Exchange. The 15-character minimum aims to keep comments substantive.

Some other things to consider: 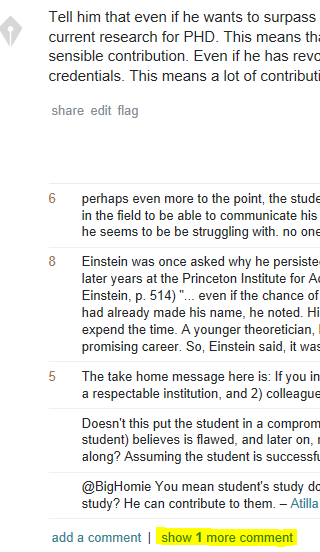 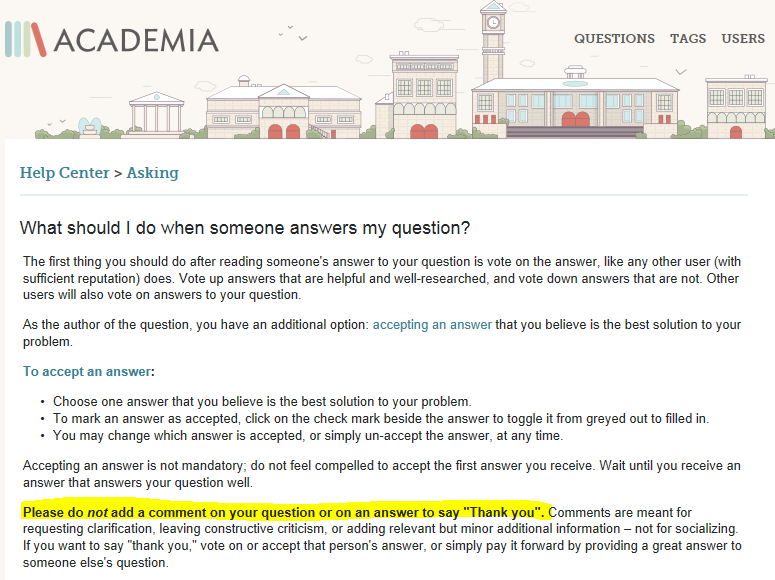 If you really feel compelled to leave a thank-you comment, I suppose you could so do "responsibly" by saying thank you – but then go back a day or two later and delete those comments. That way, the four professors get notified of your gratitude, but the thread gets tidied up without any moderator intervention, too.

Note also, though, that a busy SE user might prefer to NOT get such a notification in their inbox. It can be a distraction to go check a notification that says nothing more than, Many thanks, J.R. :), with the name and emoticon added just to reach the 15-character minimum. I know I have other things I'd rather be doing.

A simple "thanks" comment is considered "chatty." A comment that explains why you think an answer is useful, however, would be OK, as it clarifies and furthers the utility of the answer.

This site is for discussion about Academia Stack Exchange. You must have an account there to participate.

2
Are ([career], [career-path]), and ([job], [jobs]) tags synonyms?
35
What do we want Academia.SE to be?
10
Under what conditions should “thank you” comments be deleted?
1
How to select an answer to a question that I recently asked?
15
Has Academia Being Featured in Hot Network Questions Improved the Community?
3
How should we deal with good answers given just as comments?
23
Does Academia.SE welcome answers from laymen who are not active in Academia?
4
Which kinds of answers in comments (if any) do we want to keep?