Has the stance on questions pertaining to legal issues changed?

However, the question below got closed on the grounds that it is a legal question.

Has the stance on questions pertaining to legal issues changed?

Is consent required by law to take a picture or to record audio / video of a conference talk in France?

Provided that the conference does not explicitly prohibit unauthorized audio and visual recordings of the presentations, and ignoring ethical/political/any other non-legal issues.

I am aware of the question Is consent required to record audio of a conference talk in the US?, but as the question indicates it focuses on the USA only. 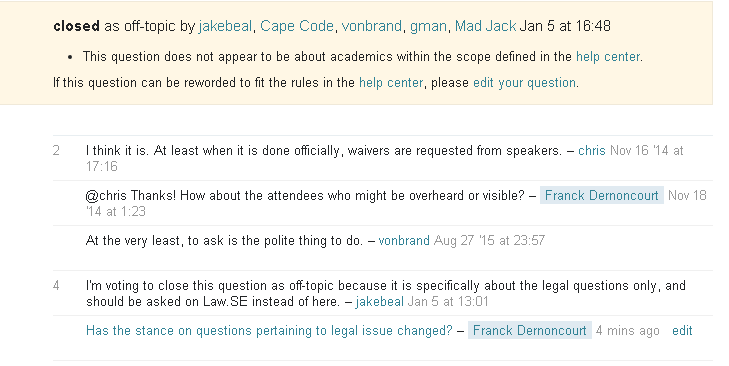 Most legal-issues questions on Academia.SE are not about the law per se, but rather about the de facto interaction of academic standards and practices with issues regarding the law. That sort of thing is completely within scope of this site.

Your linked question, on the other hand, explicitly says that it is:

in other words, focusing explicitly on the law. This is very different, and requires a precise technical answer, making it on topic at Law.SE but not here.

Presumably, you gave it this focus so that it would not be closed as a duplicate of "Is consent required to record audio of a conference talk in the US?", since the top and accepted answer to that question says that the legal issues are less important than the academic standards and practices around the issue. So either:

The stance on questions pertaining to legal issues has not changed.

The most upvoted answer in On-topic-ness of questions on legal issues related to academia? clearly says:

I believe questions asking for general legal background about a particular academic issue should be considered on topic here.

The question https://academia.stackexchange.com/q/31806/452 is therefore on-topic.

There exist a number of questions that clearly ask for the legal side only, and are not closed, e.g.:

Not the answer you're looking for? Browse other questions tagged discussion asking-questions scope .

7
On-topic-ness of questions on legal issues related to academia?
9
Should legal questions be closed as too narrow?
3
Should we specify that questions where "expert" answers are from experts outside of academia are off-topic?